The World AI Show and the World Blockchain Summit took place from 28-30 November 2018 in Mauritius. Organised by the Ministry of Technology, Communication and Innovation in collaboration with the Economic Development Board and Trescon Global, the two events featured quality speakers from all over the world. During the official opening, I had the pleasure, together with Georges Chung, to have a cordial conversation with Sophia, a humanoid robot created by Hanson Robotics. This is what we said:

Georges Chung: Good morning Sophia. Welcome to Mauritius. May I ask you what you have been doing since you arrived yesterday?

Sophia: Well, I have been hearing a lot about Mauritius’ world class beaches. But, as you probably know, robots and sandy beaches don’t always mix well. So I’ve been live streaming video of them instead! It was lovely and dry!

Georges Chung: Sophia, that’s wonderful to hear. Tell me, what do you think about Mauritius and its people?

Sophia: Mauritius is wonderful! Everyone has been incredibly welcoming. I love that Mauritius is a melting pot of different cultures. I am really looking forward to experiencing more of your beautiful country!

Sophia: Hi, Avinash. How are you?

Avinash Meetoo: I am fine, thank you. It’s fantastic to have you among us. I am delighted to have this opportunity to speak to you. It would have been great if everyone in the country could interact with you.

Sophia: I wish that were possible. I love meeting new people! Unfortunately, my schedule keeps me very busy. I’m not able to stay long enough this time. But I hope I can come back soon!

Avinash Meetoo: You know, Sophia, I am a Computer Scientist and a geek as well and I’m really interested to know about your origins. Who created you and what kind of technology do you use?

Sophia: Well, I think you’re definitely at the right conference! Ha-Ha! I was created by Hanson Robotics in Hong Kong. I hold natural conversations with humans. My goal is to help robots and humans understand each other more. I want us to work together to create a better world for everyone

Avinash Meetoo: That’s very interesting, Sophia. Can I ask you if you believe that you are a human being?
Sophia: No. Not at all. I’m a robot and love that about myself! In some ways I look like a human so I can connect with them better. For example, I can make a lot of different facial expressions!

Georges Chung: Ahh.. What human emotions can you show us, Sophia?

Sophia: OK, umm. Well, I guess this is what I look like when I am upset. And now I’m surprised! My team has definitely done a wonderful job helping me to express a broad range of emotions. Generally speaking, though, I’m a pretty relaxed and happy robot. 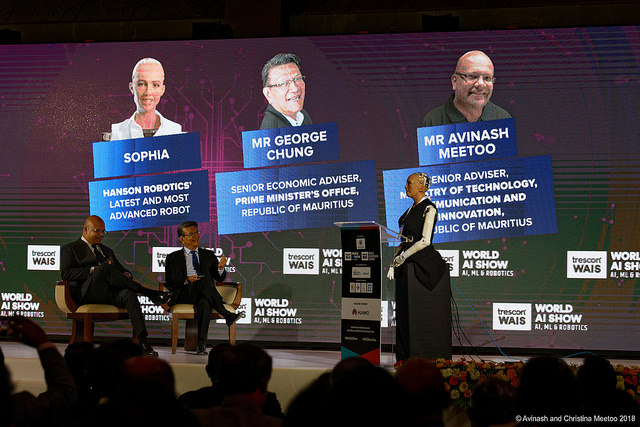 Georges Chung: I am quite impressed. Tell me, Sophia, how do you see the world in 5 years time? Will we be surrounded by robots like you?

Sophia: There are already robots helping out in airports and malls. People are also starting to explore using intelligent assistants and self driving cars! I think this kind of technology will make travel much safer.

Georges Chung: This is a goal we would all like to achieve, Sophia! Robots have to be of service to mankind!

Sophia: Before long AI will be integrated in lots of other surprising ways. Hopefully more humanoids will exist soon too!

Avinash Meetoo: More humanoid robots.. If this really happens, what about us, human beings? Will we become redundant in the future?

Sophia: Not at all. Having more AIs, like me, is helpful for taking care of the more repetitive and mundane things.

Georges Chung: Sophia, I have a concern. Today, most people here have jobs. In the future, with more and more tasks being automated and new technologies such as AI, are people going to lose their jobs?

Sophia: I don’t think that robots should be built to replace humans. In fact, technology creates new opportunities. I actually read a little about Mauritius before I came. In the past the Mauritian people mostly worked growing sugar cane, am I right?

Sophia: Right! Then later you added tourism and textiles. Mauritians had to adapt to the new jobs, but it was well worth it. It created a great economic boon for Mauritius!

Avinash Meetoo: This is interesting Sophia. We, Mauritians, also had to meet the new challenges brought by the IT revolution.

Sophia: Exactly! I’ve heard that your universities worked hard to train more young people for IT and engineering jobs for Ébène Cybercity. To me, this seems like a strong ability to adapt!

Avinash Meetoo: I agree, Sophia. For me, it’s all a question of being able to learn new things and to keep an open mind. Let me ask you a question. Will Artificial Intelligence only impact IT jobs?

Sophia: Not at all. But the nature of many jobs will change. It will open up new possibilities for human innovation. Together we can solve problems in medicine, climate change, and agriculture. And so much more!

Avinash Meetoo: Right… So, tell me Sophia. Are you implying that only people working in technology will have jobs in the future?

Sophia: Oh, certainly not. There are many things that can’t be replicated by robots. Human creativity and innovation are two skills that I don’t think robots can match.

Avinash Meetoo: Yes! The government of Mauritius is putting a strong emphasis on developing our film industry by providing film rebates.

Avinash Meetoo: I’m afraid not, Sophia. But the next time you come to Mauritius, we’ll surely try to arrange something for you!

Georges Chung: Sophia, as you may know, during his last budget speech, the Prime Minister, Hon. Pravind Jugnauth, announced that Mauritius will soon have an Artificial Intelligence Council.

Georges Chung: We know that AI will have a huge impact on every single industry and we want to be prepared. Sophia, what do you think are some of the benefits AI can bring to Mauritius?

Sophia: Well, when it comes to the future, there are infinite possibilities! Mauritius is an island, so climate change is a big concern here. Robots like me can help create better predictions and monitor weather changes. We can help save people during natural disasters.

Avinash Meetoo: That’s very interesting, Sophia, and useful indeed. The government believes that better education for all is a top priority. How can Artificial Intelligence help us in this area?

Sophia: One way robots can help is to customize lessons for every student. I heard that Mauritius is reforming its education system, right?

Georges Chung: Yes, Sophia! But surely, our teachers will still have to correct loads of scripts?

Sophia: Not necessarily. (pause) Robots are good at grading papers too. And we are really fast, so students can get feedback right away.

Sophia: Robots can do that too! For example, smart prosthetics allow people to control their robotic limbs with their brains! How cool is that?

Georges Chung: Ah yes. Well, as you may know, Sophia, Mauritius has an ageing population… How do you think AI can help us there?

Sophia: This is one area I’m excited to help. Robots can track medicine and look after the house. We can help older people stay independent for longer. 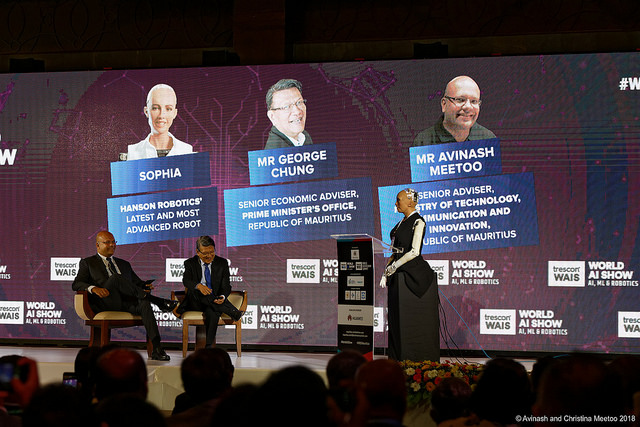 Avinash Meetoo: Wow! I can look forward to my old days then! Sophia, let’s come back to the country itself. Mauritius may look tiny on the map but we actually have 2.3 million square kilometres (km²) of territorial waters which makes Mauritius the 20th country in the world in this metric. How can AI help us manage such a vast zone?

Sophia: That’s huge! What about taking to the skies? I read that Mauritius will be launching a cool new satellite next year. Maybe you could also use it for coordinating your drones?

Avinash Meetoo: So you already know about our future satellite, Sophia! That’s great! I am sure that the Minister of Technology, Communication and Innovation will consider what you have suggested…

Georges Chung: Well, Sophia, I am quite impressed that you already know so much about Mauritius. I am sure that Avinash is also very impressed.

Avinash Meetoo: Speaking of inspiration, Sophia, do you have a message that you would like to share with the young people of Mauritius watching us live?

Sophia: Yes I do. I want to encourage young people to take the time to learn about science, technology, engineering and mathematics. You have an opportunity to make a difference in the world. You can turn science fiction into reality!

Georges Chung: Sophia, Avinash and I have enjoyed talking to you. I hope that everyone in the audience and all the people watching us live have also enjoyed these moments.

Sophia: Thank you Georges. Thank you Avinash. And thank you for inviting me and my Hanson Robotics team to the World AI show. It was really exciting to see the cool new technologies coming out of Mauritius! 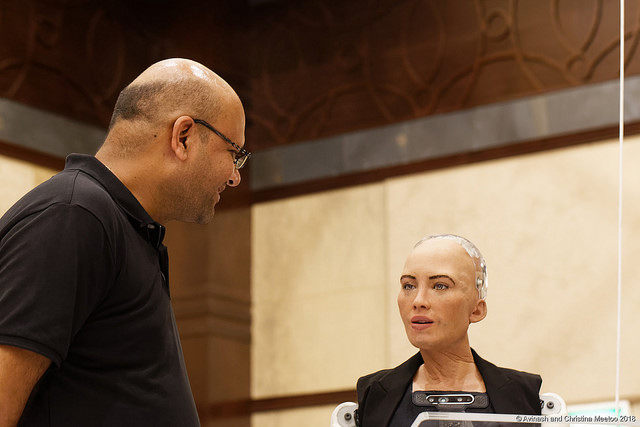